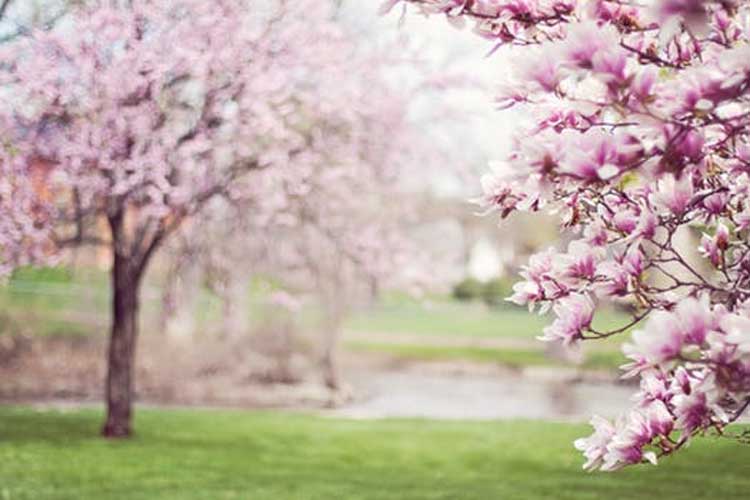 Spring Season Paragraph Topics : [Introduction, Contrast with other seasons, Condition of nature, Advantages, Disadvantages, Conclusion]
Spring Season Paragraph – There are six seasons in Bangladesh. Among them, the spring season is the best, the loveliest and the most charming. For these reasons, spring is called the king of all seasons. Hence I like this season most. Indeed, it is favorite to all.

In the cycle of seasons, the spring season occupies an exalted position. It is rich in color, beauty, music, and fragrance. The summer season is very hot. The scorching sun, hot days and stuffy nights make life unbearable. The rainy season is dull. The autumn season is wet. The late autumn season is not pleasant. The winter season is cold and gloomy. Spring has none of the inconveniences of these seasons.

With the arrival of spring, nature puts on a lovely look. Everything of nature looks fresh. The sky remains cloudless. Leafless trees get back leaf. Flowers bloom everywhere. Bees fly from one flower to another. A breeze begins to blow. Sweet twitters of birds are heard. The melodious voice of cuckoos pleases our ear. All these things have a positive influence on the human mind. People feel happier during this season.

Spring season has many advantages. This season is the period of abundance. It is the harvest period. There is no want for food. This season is such a time when people enjoy good health and it makes them cheerful. In this season, men can move about freely and safely. Besides, people can take part in many outdoor games. It is one kind of physical exercise. The students can study for a long period at night.

In spite of having a lot of advantages, this season has a few disadvantages too. This season lasts for a very short period. During this season, some people suffer from some diseases like diarrhea, cholera, dysentery etc. Pox is very common this season.

In spite of having its a few disadvantages, its advantages are more. Truly speaking, its actual stay in Bangladesh is not more than three or four weeks. Perhaps its short stay has made it dearer to us. For all these reasons, I like spring season most.

An Essay on Spring Morning

An Essay on Spring Morning – A Spring Morning Normally, I do not become much astonished or thrilled at anything when I get up from a bed, get tickled by no extraordinary emotional appeal. Because, as soon as I rise up, I lose my dreams; even the remotest feeling of dreams wither away in the presence of too much consciousness. But as soon as I woke up the other morning, I was startled. what an extraordinary feeling! Though I woke up, my dreams, as it were, were not gone. Various birds were chittering all around, doves were cooing, cuckoos calling from amidst undetectably covered branches of trees. New leaves were visible on branches of trees which had withered out during the winter. There was a smell of warmth in the air. Something seemed to have touched my heart, my dreams, my imagination. I breathed out spontaneously:

O, what is this? Mysterious and uncapturable bliss That I have known yet seems to be Simple as a breath and easy as a smile, And older than the earth.

Even after my awakening, I seemed to have entered into another dreamy realm of wakefulness. The mango-trees were in bloom. The southern wind with its touching warmth came floating over the garden on the other side. The inertia due to the long-lasted winter was gone. It was nothing but the spring, I could easily understand.

In such a morning there should be no repentance even if one happens to wake up earlier by mistake. Sleep can easily be sacrificed to enjoy such a beautiful morning. The much-familiar environment around looked new. To whichever direction I looked, it seemed to me that some hidden initiatives were being taken by someone stealthily to bring about a drastic change in nature. The sky was bathed in vermilion. Lively freshness was ostensibly visible on new green leaves. Thousands of flowers adorned the morning all around. A mysterious reddish layer encircled the horizon. The sky held up an upturned image of itself on the transparent water of the nearby lake. Domestic animals were wearing a mask of mundane smile over their faces. Everything satisfied the eye.

All of a sudden I caught sight of several girls on the roof of a neighbouring house. They wore yellow sarees, some golden flowers are woven into their hair. Several yellow birds flew over their heads, calling loudly-tee tee.

O, was that all a sight, or just a feeling! was that any reality, or just an accidental extrovert reflection of my own imagination?

Slowly walked I down, like a bewitched soul; on my hypnotized legs. I took my stand in my garden. So much sound! Such a wonderful combination of sounds of so many tones! That very morning was, as it were, a poem, a full-fledged poem reflecting all the tenderest emotions of the inner self. The mind was perhaps awaiting something thrilling. Perhaps it took much delight in being startled. Suddenly there came to my hearing some sounds-Coo, Ku, Ku. I was startled really! Because I had been waiting for this very event during the last part of the year.

It came into my sight that many other big and small birds were singing to greet the spring morning; with that melodious sound was mixing the rhythmic beats of the coconut leaves that were blithely quivering in the air. I realized the truth that spontaneity has a specific rhythm and rhyme of its own and that natural emotion has a normal playful pace, though it behaves like a wayward butterfly flying in a not-so-strong whirlwind. I realized that it is a pleasure to sing out in unison with nature’s concert. I was beyond myself with an ecstatic feeling.

I was only moving my eyes around, spell-bound. New sight adorned the environment all around. There was a jovial vivacity in the eyes. I saw that innumerable bees were sharing amorous hugs with thousands of wildflowers. Will they only gather honey today? No. Perhaps some purposeless merry-making tickled them much during that golden morning.

*All of a sudden it occurred to me that I had my slipper on. I put them off. As soon as I put my bare feet on the bedewed grass, it seemed to me as if the spring had touched me. There was something human in that touch. That grass too had an emotion. I walked on it slowly. Why were the dew-drops touching me like that? Never before had I felt such an intimate touch of nature. I could feel that everything could be felt from within and from without. :

That spring morning was a symbol of youth, of the spring itself, of the matured emotions of the heart. It had its beauty, smell, taste, its sound. As a result, it could be seen, heard, smelt, and touched. This multi-dimensionality of the morning is never to be forgotten.